Your Partner
In Space

We Create the
Future

For many years now, scientists have been warning us of the next big disaster. The super volcano in Yellowstone National Park, for example, erupts, on average, every 725,000 years. The last major eruption was 631,000 years ago. If another major eruption were to happen today, the blanket of ash would extend for thousands of miles, and would cover three quarters of the Earth’s surface to some extent. The explosion could have a force as great as 1,000 Hiroshima sized atomic bombs, and the resultant ash cloud would cause a “nuclear winter” which could last as long as 80 years, causing a die-off of the majority of life on the planet.

In his book, Brief Answers to the Big Questions, the late Dr. Stephen Hawking stated that the possibility of a major asteroid striking the Earth is probably the biggest threat facing mankind. Although estimates of such a collision are only one in 300,000, it is not a question of if, but of when.

The possibility of nuclear war is always present. Should the unthinkable happen, estimates are that there will be anywhere from 100 million to a couple of billion deaths worldwide.

In his book, The Case for Mars, author and aerospace engineer Dr. Robert Zubin emphasizes the ever-lurking danger of a worldwide catastrophe, and the need for humankind to become a multi-planet species in order to avoid total extinction of the human race. This has been echoed by other notaries such as the late Dr. Stephen Hawking and Elon Musk, CEO of SpaceX.

The current Covid 19 pandemic has been a wakeup call for all of us. It has demonstrated that we can be blindsided at any moment, day or night. In the past, viruses such as the Bubonic Plague have killed upwards of 200 million people. Furthermore, for many doomsday scenarios, there is no amount of preparation that will prevent a major loss of lives. But there is something that we can do.

In 1969, the United States landed the first humans on a body outside of the Earth. One would have thought that Mars would have been the next logical step in the space program. However, unlike the moon race, which was mostly a political contest with the former Soviet Union, Congress had no incentive to appropriate funds for a Mars mission. With the global pandemic of Covid 19, maybe not all, but perhaps a few congressmen understand that space exploration is not just a bunch of grown men playing with expensive toys, but that it serves, perhaps, as the one thing above all others that we should be doing if we are ultimately to survive as a species. We need to colonize Mars, and then later, other places in the solar system. Will there be challenges? To be sure. But let us be reminded of the words of wisdom from the late President, John F. Kennedy, in his speech on America’s commitment to land a man on the moon: “We choose to do these things not because they are easy, but because they are hard.” Americans have always accomplished what they set their minds to. 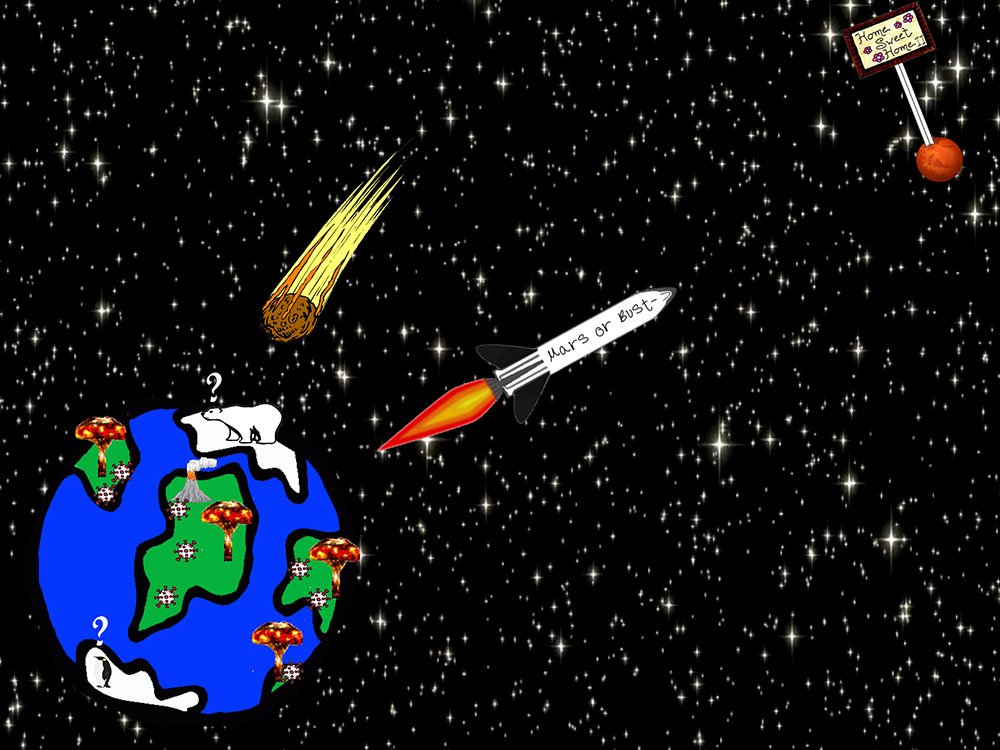 Will it be expensive? Yes and no. Estimates range from $200 million to $2 trillion. Our best guess is around $50 billion. This sounds like a lot of money until you put it into perspective. First off, a serious Humans to Mars Mission is likely to take 10 years from start to finish, or $5 billion per year. But if five countries were to do the mission together, the cost would then be only $1 billion per country per year.

The GDP of the US currently stands at over $21 trillion per year. Thus, $1 billion toward a Mars Mission only represents .005% of our GDP! There are 10 other nations with a GDP of $2 trillion or more. For even the smallest of them, $1 billion would only represent .05% of their GDP. Putting this into perspective another way, for an annual household income of $100,000, .005% represents just five dollars. In other words, you really wouldn’t miss it, and neither would any of the larger economic GDP nations on the world.

We must establish human colonies off Earth if we are to survive as a species. At Space Mission Architects, we have made facilitating a Humans to Mars Mission a future but definite goal. We do not know when the next major disaster will strike, but unless we act now, it may be too late to act when one does. What can we do? Write to your congressman, senators, and the White House and express your concerns. Ask that they act now, rather than when it is too late. Above all, convey urgency in your message. With many voices speaking in unison, we have, at least, a chance to survive.

You can locate your congressman and find contact information here:
https://ziplook.house.gov/htbin/findrep_house

And the White House here:
https://www.whitehouse.gov/contact/

Ken Lunde has worked in the Aerospace Industry since 1964. He pioneered the use or fiber optics on the Saturn V Apollo program. His other achievements and contributions include distance and closing rate Doppler radar, automating printed circuit board assembly, and the development of high altitude temperature sensors for NASA. Mr. Lunde also served in the US Air Force on a Mace missile launch crew. He holds a BSEE from DeVry University.